Asian-American men mostly date within our own race so it can seem natural to ask, do Asian men like Latina women? And the answer is YES, but with a caveat. That caveat being Asian men aren’t used to, or taught how, to interracially date so they don’t look at women of other races as romantic partners in the first place. So you have to INTRODUCE the idea that other women, like a Hispanic female, might not only be open to dating an Asian male, but even be ATTRACTED to him so he can then start looking at other women as possible girlfriends. 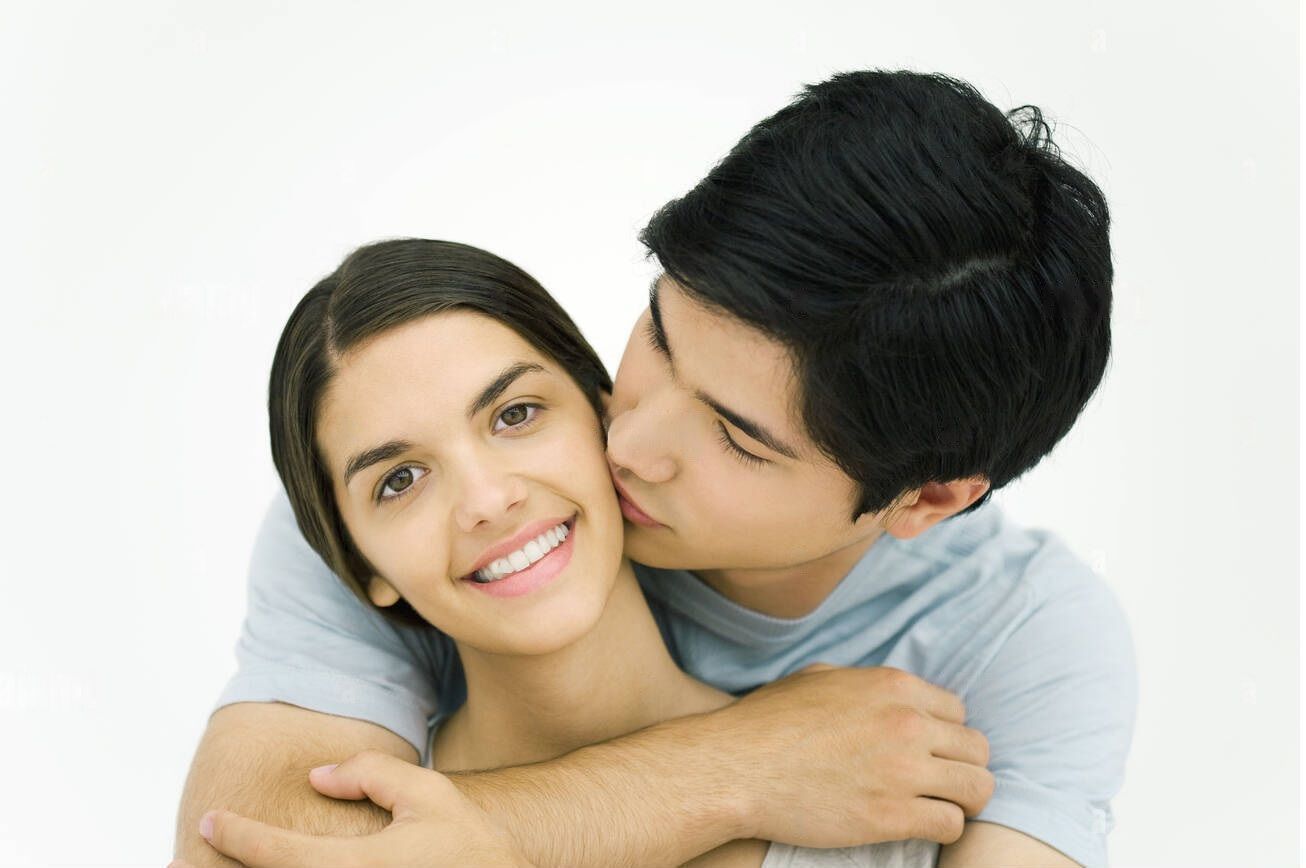 Unfortunately because of how we’re represented in popular culture by the mainstream media, it can feel like a lost cause for Latina girls to like Asian men. And while it’s true racial preferences play a strong part in whom we choose to be our romantic partners, Latina women (and Latin culture in general) is very complicated and nuanced, Asian men and Hispanic women do have a lot in common.

So let’s talk about what’s working against us and what we can make work for us.

Challenges Asian Men Have With Attracting A Latina Girlfriend

If you’re like most Asian men you’ve experienced discrimination in all sorts of ways. Maybe people say to you “Ching-Chong-China”. Or “Bruce Lee”. Or “Jackie Chan” etc. Maybe people tell you “You’re good-looking… for an Asian” or some other backhanded compliments. Or many times women will flat out refuse to date you because of your race 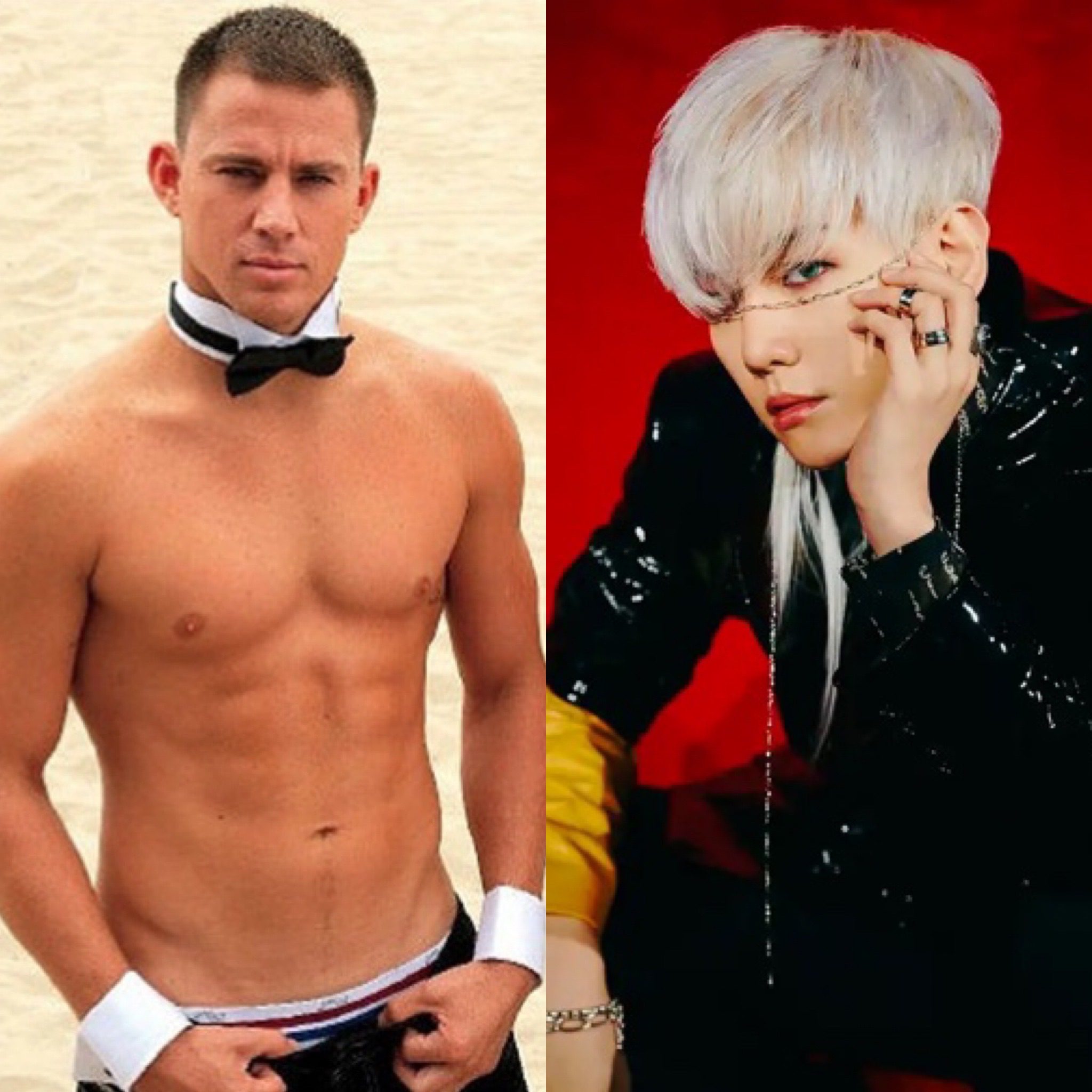 In an online dating study, Hispanic women would choose a “Slender” man over an “Athletic” mana

And while there are challenges for Asian men, there are still advantages and reasons why a Latina would like an Asian man. In a study of daters’ physical preferences, Latina daters were found to be significantly less likely than white female daters to prefer men with Athletic body types (OR = .418, p ≤ .001) and more likely to prefer Slender (OR = 1.946, p ≤ .001) and Fit (OR=1.555, p ≤ .01) dates. And that’s because of a “body of literature that shows African-American women and Latinas are less impacted by mainstream media”

Ergo, they want a man who represents traditional Western heteronormative emotional values of masculinity while eschewing the physical phenotype of “muscle head.” So if your personality is more traditionally American, but if you look like a Kpop idol, you’re in luck.

So if you’re willing to push past the challenge of fighting against stereotypes, you’re definitely going to find Latinas who like Asian men and are attracted to you (and Black women for that matter too). But put it this way. The more adversity you face, the stronger you become. The more likely you are to gain the strength and skills you need to learn to be successful which will stick with you for life.

You’ll know how to talk to and date White women. Hispanic women. Black women. You can learn to make any type of woman your girlfriend regardless of race, height, money and educational levels. It won’t matter the differences in popular culture.

So how sure am I that… 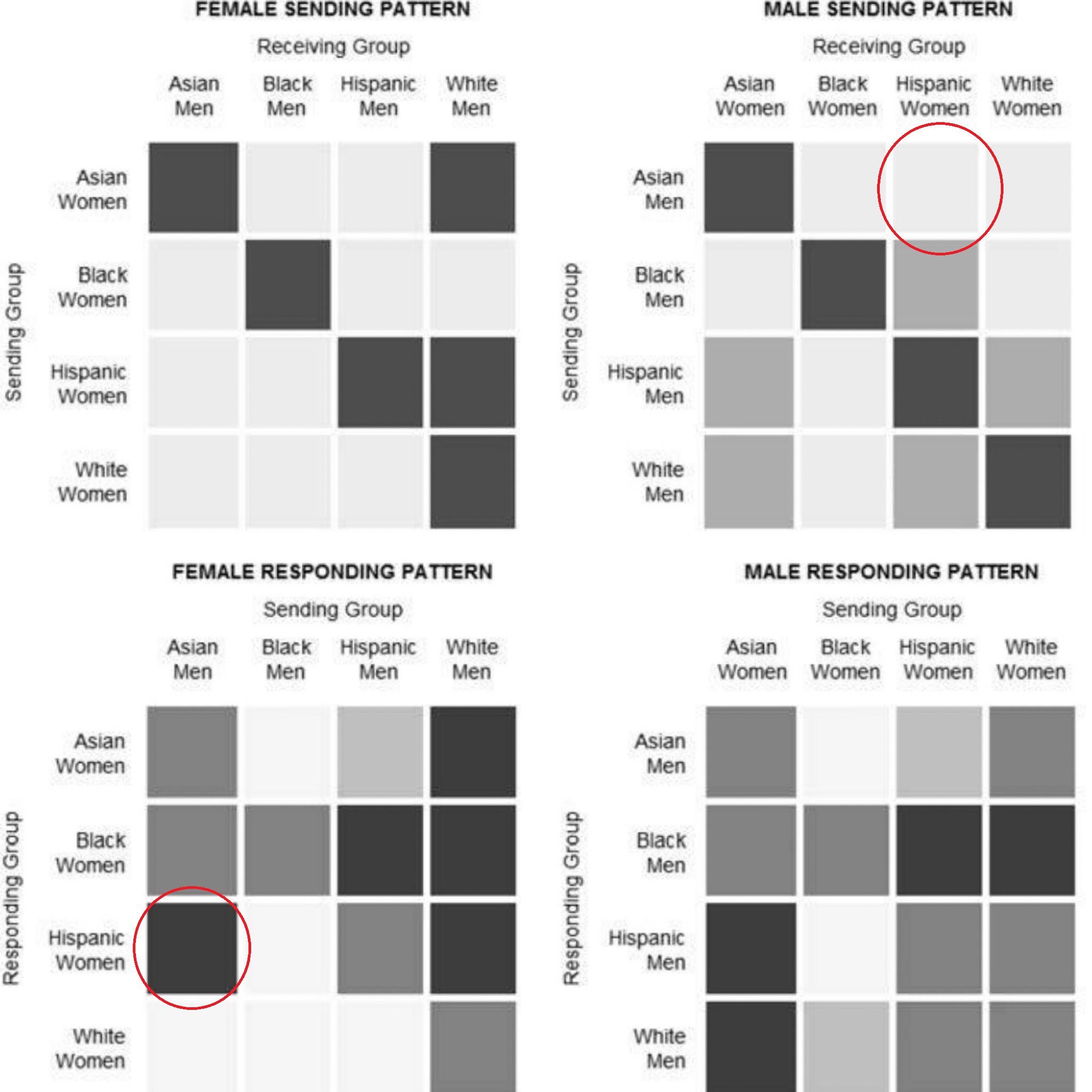 In an online dating study, Asian men are shown to not as likely to send messages to Hispanic women, but Latina females are MORE likely to respond to Asian men IF he messages her as seen in the graph (darker is better). In finance lingo, this is an arbitrage opportunity where there’s a group that desires and is more responsive to you… IF you’re willing to make that first step and message her on online dating apps or approach her in real life.

Now you’re on even footing and what’s not to like about that? Because she’s more likely to evaluate as an individual, unique human being instead of a stereotype. In fact, you have a SLIGHT advantage because she’ll respond to you FIRST before even a Hispanic or Black man and EQUAL to a White male.

Culturally, and I am speaking with very broad strokes here and not trying to stereotype, Latina women are taught to embrace the traditional aspects of Western femininity: like being sensitive and vulnerable. But that also means a heterosexual Hispanic woman typically desires a man to fit the more Western defined role of masculinity: which is to be strong and protective enough to create the space with which she can be vulnerable.

Gender differences, at least in the roles that are traditionally defined in Western/Spanish/Catholic culture, are more clearly pronounced and desired: both in the men and the women. And so Latina women are found to be desirable within the lens of the Western aesthetic. They’re family oriented. They’re passionate. They’re feminine. And they have a sensual body.

In fact, some have even claimed Latina women have one of the best booties in the world. The type of booties which make most women jealous and make most guys drool. Combine that with their usually thin figure and they have the perfect body. Is it then any wonder that a woman with both an amazing personality and equally as amazing body is so sought after as a girlfriend?

But if Hispanic women are desired as girlfriends and wives, why would Latina girls like Asian men in the first place? Do Asian men have a shot at making a Hispanic lady his girlfriend and wife when there’s so much other male competition out there? 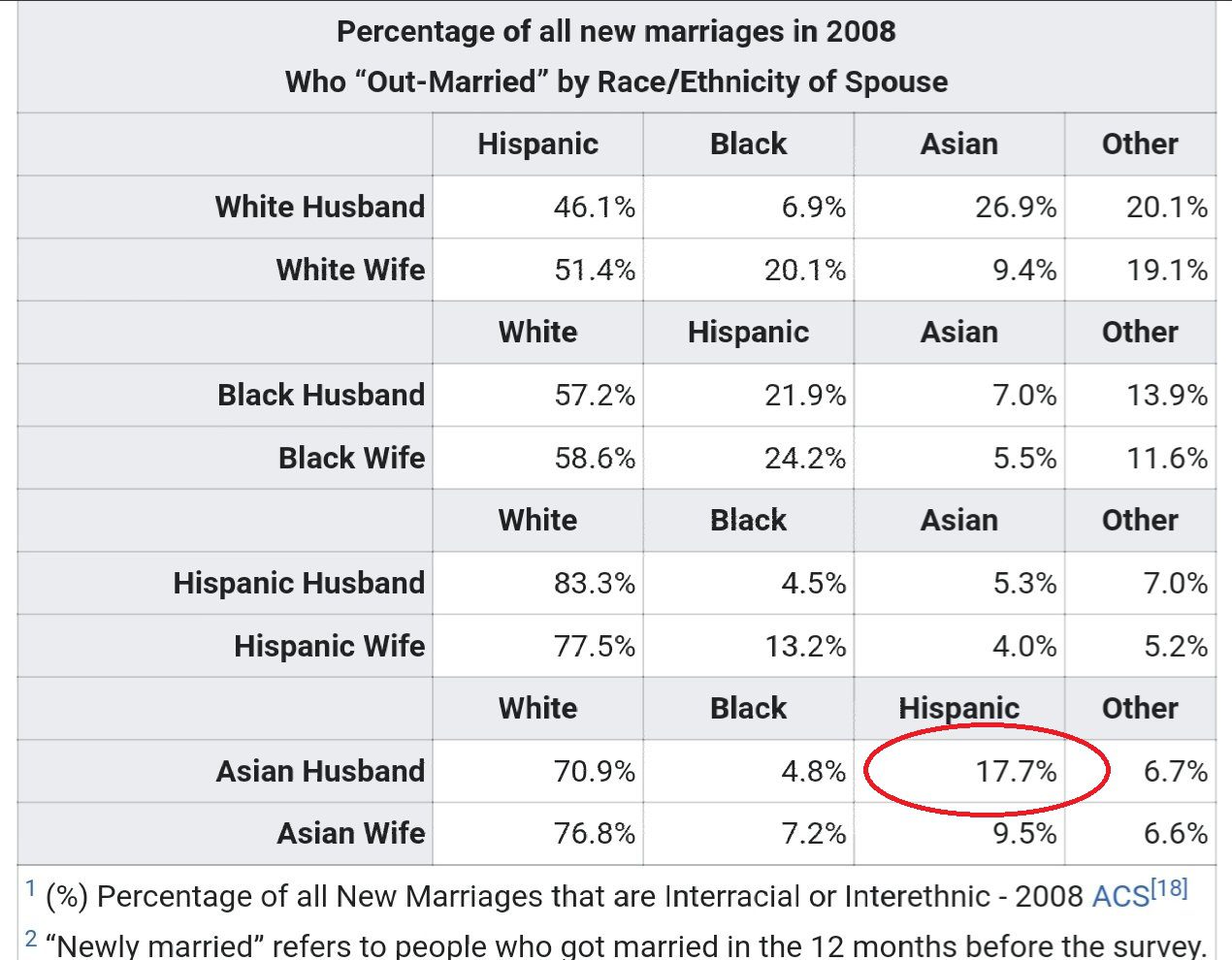 Proof is in the pudding and Asian men actually marry Hispanic women at 17.7%, second to only Asian men and White wives. Part of that is also because of education levels: Asians with some college are the most likely to intermarry while a Hispanic woman is 46% more likely if she has a bachelor’s degree or higher.

And we Asian men absolutely have a shot and that’s because we are culturally very similar to one another. Traditional Latina women are very family and relationship oriented which resonates with conservative Asian values. This means they’re very similar to Asian women in what they look for in a man. They usually desire a partner who’s financially stable. They usually desire someone who has high education levels. And they usually desire someone who has a good career and is looking for something more serious. Asian men have all those traits in spades.

But look, there are things Asian guys will have to work on in order to make such an interracial relationship to work. Even though Latina women may like many Asian male traits, they do desire guys who are super confident, or what is called machismo in Latin culture. Gender differences in Latin countries are very pronounced within the Catholic / Western prism, which means “men act like men and women act like women.”

There is a cultural dichotomy here, where on one hand you have Asian culture that tends to center on consensus, family, community, and respect (Again, I’m just making broad generalization for the sake of simplicity). And on the other hand with Latin machismo, the value is placed on male dominance, aggression, exhibition, and nurturance. This is counterbalanced if you’re an Asian American who may have a more Westernized personality.


Let me give you real life examples: While I was instructing the LatinTour (the Great Romance Adventure), I saw countless men approach women in a bar and make out with her within literal minutes. Without saying a single word. I’ve also seen Brazilian men approach women while stuck in traffic, go into her car and start kissing them.

If you did this to a White woman in America, you’d be arrested for sexual harassment. Not to mention public displays of affection in many Asian cultures are a nonstarter where even something like holding hands with a man  is taboo. But (some) Latina women are not only used to displays of machismo, but they expect extreme confidence from their man. They’re used to those clear gender differences between men and women.

This is something Asian men have to work on. I’m not saying you have to go up to a woman on the street and start kissing her. I’m not saying to be exactly like Hispanic men in order to get a Latina to like Asian men. And I’m not saying Asian men are less confident than Latin men. Again, it all comes down to the cultural nuances I talk a lot about on this blog.

Try approaching a Latina woman and do things like not state your intentions early on. Or try not making any physical contact early on and she’ll disappear. In fact if she gives you any indicator of interest and you don’t approach her right away, game over. See, Asian women are much more tolerant of men moving slower. And they expect it. And White women are also very tolerant of men making a move slower. But Latina’s aren’t.

Now I don’t want to make it sound like this is impossible. The good news is when you get into the habit of approaching women. And when you can do it anywhere, anytime, it will feel like second nature. And approaching women within seconds will feel natural.

And to be fair, the art of approaching quickly and directly is all Asian men have to work on. Especially when attracting Latinas. Get through that initial barrier and the rest will take care of itself. She’ll be able to experience those gender differences she’s been raised to expect.

And you won’t have to change who you are, not that you should for anyone, in order to get a Latina woman as a girlfriend.

Benefits Of Dating A Hispanic Girlfriend

5 Things To Look For When Hiring an Asian Dating Coach

Most Asian men I coach are dead set on the idea that they only want to date Asian women. And whilst many of them do end up marrying an Asian, this is a very dangerous mindset to start out with. It’s very dangerous to not explore outside societally enforced racial preferences.

Now I completely get it if you want to start improving your dating life and you don’t know where to start. Many of my students are in that position. They’ve tried other dating coaches. And while they may have helped, they couldn’t relate to what many Asian men go through. And hence they might not know what to do to overcome those obstacles.

But luckily, as the #1 Asian Dating Coach in the world can make dating much simpler and more enjoyable for Asian men. And yes this works regardless of what your racial preferences are for women. White. Black. Latinas. Other Asians. Regardless. Because here’s the thing. Dating should be fun. It should feel natural. And it should not feel like you’re tearing your eyes out trying to make it work.

If you want to find out more, make sure you check out this page and see if this is for you.